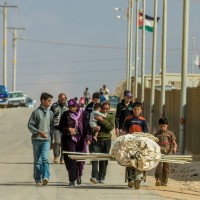 With all the talk about refugees and immigration, we sometimes miss the basics. Here’s a primer on immigration terms adapted from my book, The Skeptic’s Guide to Immigration.

Who are immigrants?  An immigrant is anyone who has left the land of his or her birth and moved to another country with the intention of settling there. Immigrants may be fleeing war, poverty or natural disaster or they may be seeking better education or employment.

Who are refugees? A refugee is a person outside of his or her home country who has fled due to war, natural disaster or for fear of persecution based on race, religion, nationality or political opinion. Referring to people as refugees carries meaning under international law. After WWII, nations came together to agree on basic terms for refugees. The 1951 UN Refugee Protocols were updated in1967 and define a refugee as:

Countries who signed on to the UN treaty agree to give refugees a certain level of care and protections.

For some countries, officially referring to people as refugees makes those people eligible for certain status in that country. Some leaders who insist on calling people fleeing Syria migrants or immigrants, are pushing back against their refugee status and therefore, seeking to limit their acceptance and responsibility.

Who are asylum seekers? According to the UN, an asylum seeker is someone whose claim to be a refugee has not yet been evaluated. National asylum systems decide which asylum seekers qualify for protection. Seeking asylum, particularly political asylum, in the US is a difficult process that almost always requires representation by an attorney well versed in the law.

What is temporary protected status? Temporary protected status (TPS) is granted to people in the US who cannot return to their home country because of natural disaster or ongoing armed conflict. Although it is generally granted for six-eighteen months, it can be extended. The status has been applied to people from El Salvador, Haiti (after the earthquake) and Syrians who were already in the US on legal visas.