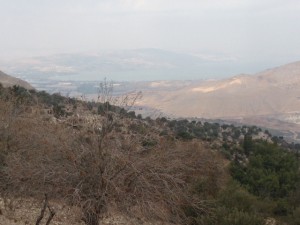 You know you’re close to a border when your cell service suddenly changes and “Welcome to Israel” appears on the screen.  Except we weren’t in Israel.  We were in the northwest corner of Jordan, near the boundaries of Israel and Syria.  Borders in this region are more than lines on a map.  They mark the difference between war and peace. But cell towers mock borders and reminds us how close countries are nestled together in the Middle East.

Just over the hills to the west of us, Lake Tiberias shimmers peacefully.  To the north, Syria is shrouded in fog and war.  The border to the west is secure, with two official crossings between Jordan and Israel, countries with a peace treaty.  The border to the north is patrolled, but refugees continue to flood in, fleeing both their self-appointed leader and the various groups of rebels who lay claim to corners of the country.

Jordan has been a crossroads for centuries, we learn.  As we see architecture from the Roman and Byzantine eras, a local man tries to sell us ancient coins he has found on the land.  “You want Roman coins?  Byzantine?  Greek?” he asks, pulling dirty old coins from his pants pocket. Our tour guide says they are probably all authentic.  He shrugs his shoulders and explains that when it rains, new discoveries appear.  “It’s just how it is here,” he says.

The contrasts are almost too much to take in. We are in a modern country walking through ancient dig sites in view of two other countries.   We step on ancient ruins where one civilization overtook another while glimpses of the disappearing country of Syria occupy our peripheral vision.  The Golan Heights, officially occupied by Israel for nearly 50 years, rises to the north of the lake.  I wonder if those who live their are now happy to be occupied instead of part of the madness that has overtaken Syria.

The reality of the Middle East is all here:  ancient and modern, peace and war, occupation and resistance.  My first day back in Jordan reminds me that this is a place where contrasts and contradictions are common.  It’s just how it is here.