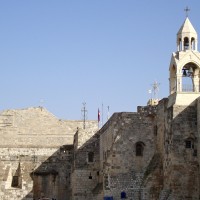 On a sunny Saturday afternoon in early March, the cafes surrounding Manger Square in Bethlehem are doing a brisk business. A waiter greets passersby in French, then Russian and German. Switching to English he offers a grin and a thumbs up. “Obama!” is all he needs to say. The American president’s visit may be controversial in some places, but here in Bethlehem it has helped encourage tourism, the lifeblood of the city.

On Saturdays tourists often take day trips to Bethlehem from nearby Jerusalem, where the Jewish Sabbath is strictly observed, closing shops, restaurants, theaters, and public transportation. A taxi from East Jerusalem brings visitors to Bethlehem in twenty minutes, even with a brief stop at the checkpoint.

Like President Obama, most tourists come to see the Church of the Nativity, the site where many believe Jesus was born. But others come to visit the quaint city, no longer a “little town” but still a charming place where residents enthusiastically welcome foreign visitors. Stores sell Christmas ornaments, olive wood crosses and creches year round, and cafes offer international fare as well as “authentic Palestinian dishes,” Arab coffee and hookahs.

While the majority of the population is now Muslim, the Palestinian Authority protects Bethlehem’s Christian identity. The mayor must be Christian–Vera Baboun, a former English professor, was elected last year as the first woman mayor–and Palestinian police guard the Christian sites. Last year the Church of the Nativity and the Pilgrimage Route were awarded UNESCO world heritage designation after the PLO applied for the status.

Christianity is good for business in Bethlehem, a fact not lost on most store, café and hotel owners who are still recovering from the bleak years during and immediately following the Second Intifada, when fear of violence kept most tourists away. Now business is picking up and Mayor Baboun came to Washington last month to promote the Bethlehem Development Initiative (BDI), a multi-million dollar plan to revitalize the city.

The Christian character of the city is not only historic. While Orthodox traditions and institutions date back centuries and Orthodox priests still lead the very visible religious festivals, Catholics and various Protestant denominations are also strong. Perhaps most surprising is the strength of the relatively recent evangelical and conservative mainline Christian institutions in Bethlehem. Careful to use the term to describe their theology, not an overt tendency to seek converts, evangelicals are known in Bethlehem for attracting new international visitors, donors and investors.

Bethlehem Bible College (BBC), established in 1979, has gained an international reputation for training ministers, theologians and lay Christian leaders. Openly evangelical (the school affirms the statement of faith of the National Association of Evangelicals) the school gained attention in recent years for organizing the bi-annual “Christ at the Checkpoint” conference, which attracts well-known evangelicals from the U.S. to both speak and attend.

The International Center of Bethlehem (also known as Diyar) is on the campus of the Evangelical Lutheran Christmas Church and includes a guesthouse, conference center, restaurant, and gift shop. Closely affiliated are the Dar al-Kalima schools, a K-12 program re-established in 2000 (after it’s original founding in 1860) and a two-year college founded in 2006. Rev. Mitri Raheb, pastor of the Christmas Church, keynoted a breakfast meeting last month associated with the National Prayer Breakfast in Washington, and helps encourage churches to support the BDI.

Although the Holy Land Trust is not a religious institution, founder Sami Awad has become a popular figure among American evangelicals who are attracted to his message of pacifism and his training for “peacemaking.” Born and raised in Bethlehem (his father founded BBC) Awad was profiled in “Little Town of Bethlehem” a film shown in hundreds of U.S. churches and has been part of a speaking tour sponsored by World Vision.

An unlikely tourist attraction in Bethlehem is the concrete wall that rises 26 feet above parts of the city, separating the West Bank from Israel and providing a canvas for everyone from the famous graffiti artist, Banksy, to tourists who write their own sentiments in a variety of languages. On any given day, tourists line up to have photos taken in front of the concrete billboard. A group of students from evangelical Wheaton College Wheaton College(IL) spent days painting a 20 foot long message, “Love Wins” along part of the wall.

While President Obama’s visit will be brief, to the ancient city of Bethlehem it is just more evidence of renewed international interest in the city where Christianity was born and still thrives more than 2,000 years later. For the small, but tenacious Christian population, it is one more sign of hope.