Home > Blog > The Girl with the Little Orange Purse 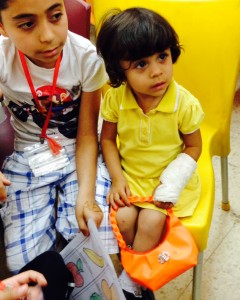 In the Jordanian city of Irbid, less than 20 miles from the Syrian border, refugees arrive daily.  Most have walked, carrying few possessions, and many are traumatized by seeing loved ones killed or from dealing with their own injuries.  Some Jordanians seem as stunned as the Syrians that a catastrophic war has destroyed so much of their neighboring country.  “We always went to Syria on weekends,” one woman tells me.  “It was an easy drive and the country was beautiful and safe.”

But it’s not safe anymore, so families cross the southern border and many end up in the third largest city in Jordan, where the population of just over a million has swelled with refugee families living in apartments, spare rooms and even tents.

Jordanians have shown remarkable hospitality to the refugees, especially to the children.  Child-centered programs have  popped up in churches and community centers, clothing drives are everywhere, and international nonprofits provide soccer fields and learning programs for the thousands of children suddenly displaced from all they knew.

Most of the children seem incredibly resilient.  They play with new friends and join new classrooms and play games with other refugee children.  But there are always a few who linger on the edges, still coping with the traumas they have witnessed.  In one center run by World Vision, I watch a little girl with a cast on her arm sit quietly while others join in the activities.  She holds a small orange purse with both hands, unwilling to loosen her grip in order to play.  Her older brother hovers nearby, making sure she is safe.  She looks at me with big eyes, seeming to tell me that she is not yet ready to join in.  She finds comfort in a little orange purse, perhaps donated by someone, perhaps a treasured possession brought from her home.