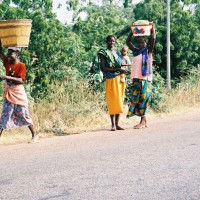 For many years I sat in a pew on Sundays, listening to occasional sermons about the poor, giving to special offerings and looking appropriately sympathetic and concerned about poverty. But I did not truly- in evangelical speak- have a heart for the poor.

For much of the rest of the week I was consumed with not being poor. I was working to build my business, increase profits and move up the wealth ladder. I reasoned that the more money I made, the more I could help my church and other worthy organizations. While I heard Christian concern expressed about poverty, the stronger message was that I was rewarded for accumulating wealth. The farther I moved away from poverty, the more I was asked to join church committees and nonprofit boards. The poor may be “blessed” but the wealthy are popular, especially in Christian circles.As a woman business owner, I was sometimes asked to speak about my experience. I usually gave a nod to good timing, luck and being blessed. But I mostly talked about hard work, determination and focus. My upbeat message was aimed at helping others realize that they, too, could succeed. In retrospect, the subtext was a not so subtle “God helps those who help themselves” theme.

My worldview began to change when I joined the World Vision board and traveled to the developing world. There I met men and women who were remarkably hard working, determined and focused. I spent time with women who cared for their families and also worked at other jobs from before sun up until dark. I encountered people who were intelligent, entrepreneurial and absolutely ingenious at overcoming obstacles. And despite all of these attributes, they were still numbingly poor.

For the first time in my life, I actually knew desperately poor people. The more I listened to their stories the more it became obvious to me that if there was a difference between us it was that they worked even harder than I ever had. I remember standing next to a woman in a Haitian slum, watching her cook with one hand, care for her baby with the other and occasionally use her cooking spoon to defend her one room shack from the dogs and young men who threatened to take the little food she had. With stunning clarity I realized that I could never survive in such circumstances, let alone succeed.

These realizations led me to study poverty from a slightly different point of view. Instead of asking why others were poor I had to ask why I wasn’t. If hard work and determination didn’t really set me apart, what did? Much of what I had taken for granted in my life took on new meaning when I compared myself to some of the people I had met and noted our differences. My list included:

• I had access to a good education. I attended public schools that prepared me well for college. Unlike many young women in the world, I did not have to beg my parents to let me go to school instead of doing family chores or caring for younger siblings. I did not fear that I would be married off or sent to live with a male relative or that I would have to find someone to pay for my school fees in exchange for work or sexual favors. I did not have to walk miles to the closest school or fear being assaulted on the way. My school expected as much from girls as boys.

• I am healthy. Throughout my childhood I ate nutritious food, took vitamins, received my immunizations, and slept soundly each night in a safe and comfortable bed. I did not go to school hungry unless I was dieting or sleepy unless I chose to stay up late. My worst illness was a cold or flu and I visited my family doctor regularly to ensure my good health. Unlike most children in the world, my health was considered important and guarded by my family. When I later became pregnant, I had excellent pre-natal care and my babies were delivered safely.

• As a woman, I am protected by the law and society. Unlike many women in the world, I chose whom and when I would marry. If my husband didn’t treat me well, I could divorce him. I was free to start a business and own it myself. I could own a house and other property in my name. For much of my life I took these rights for granted until I learned how few women were similarly protected.

• Insurance protects me from disaster. As naïve as it may sound, it had never occurred to me that most poor people in the world have no insurance to protect them from a fire, flood, theft or illness. Richard Leftley, founder of MicroInsure, a company that works to mitigate risks in developing countries, compares the lives of the poor to the childhood game of Chutes and Ladders, where every illness, emergency or disaster sends them back into greater poverty. I began to wonder where my life would be if we had personally paid for storm damage, medical bills and other costs over the years. What if every risk was potentially catastrophic?

• I live in a stable country. Whatever concerns one has about the way our government operates, there is remarkable stability. Our currency does not have wild swings in value. Our laws do not change at the whim of a leader. A contract that is valid today will most likely be valid in 50 years. In many countries, this would sound like a wild fantasy. Without stability, it is almost impossible to operate a business or plan for the future.

• I have access to capital and can save my money. Borrowing money to buy a house or car was a relatively simple undertaking for me. But mortgages and other forms of loans are much more complicated in many countries and often carry prohibitive interest rates and crushing terms. It is also more difficult and risky to save money in many countries, where banks have minimum requirements and fewer protections. Most poor people really do hide any money they have under a mattress or bury it in a tin can where it never earns interest and is easily stolen.

• I am part of a growing economy. While I often talked about starting my company from scratch, I had really launched my business into the flowing river of an economy that carried it forward. For most people in the world, launching a business would be more like entering a stagnant pond and needing to do all the work to move forward. My business success was as much a product of other people’s efforts as my own.

• I was born into a middle class home. Although I first met poor people in far away countries, I eventually came back to meet and listen to the poor in my own city. That’s when I realized how few miles separate a comfortable suburban life from one of inner city poverty. I met a woman who had never visited a dentist in her life and lived with aching jaw pain and mothers who had never taken their children to the doctor. I learned how some public schools don’t have books for all the children and how some children work hard to pass courses only to find that their curriculum has left them unprepared for college. And I was stunned when I looked at a map and realized less than ten miles separated my warm, safe home from some of the worst sections of my city. Had I been born a few miles away to a family dealing with such pressures, would I have had any chance of succeeding?

Instead of wondering why others are poor, perhaps we need to examine why many of us are not. Has God chosen to bless us in special ways? Have we worked harder or been more determined? Or were we born in a country and zip code that gave us so much more than we ever acknowledge? My own shift in understanding about poverty came when I finally understood why I am not poor—and how easily I could be.